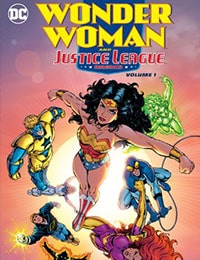 Wonder Woman takes over as leader of the Justice League of America, whether other members like it or not! Acting at the behest of the United Nations, the team must respond to a human rights crisis in a remote African nation, only to find the populace under the thumbs of the super-powered Extremists. The team must then jet to Norway, where the young superhero called Ice struggles to keep the nation out of the hands of her older brother. All this plus the mystery of two Guy Gardners! Comics writer Dan Vado is joined by a team of veteran artists that includes Kevin West and Rick Burchett, who introduce Wonder Woman as the new leader of a very different kind of Justice League! Collects JUSTICE LEAGUE AMERICA #78-85 and JUSTICE LEAGUE AMERICA ANNUAL #7.