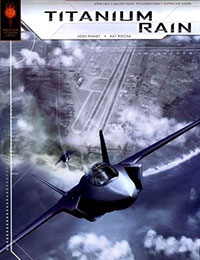 To be alive is to be at odds with the world. Man against nature. Man against man. The instinct to survive is what has made us who we are. In the year 2031 mankind's survival instinct is put to the test when a civil war in China spirals into global conflict. Nations are destroyed. Millions are killed. And for many, like US Air Force pilot Alec Killian, survival will mean shedding some of his humanity in exchange for biotech and machine. Is this the ultimate corruption of nature? Or the birth pains of a new chapter in mankind's evolution? From the team who brought you the acclaimed cyberpunk series Utopiates comes a sci-fi war epic for the post-millennial age. In the spirit of books and films such as Ghost in the Shell, Innocence, and Black Hawk Down, Titanium Rain follows one pilot's journey through mankind's worst, only to discover its best.