Ray and Joe: The Story of a Man and His Dead Friend Comic 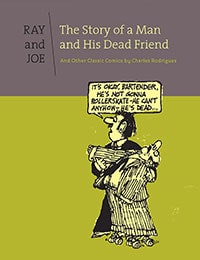 Fantagraphics is proud to announce the release of the first volume of another great, under-appreciated, quintessentially American cartoonist. "Black as sin and decay and perversion" is how National Lampooneditor Tony Hendra described the work of Charles Rodrigues. By all accounts, this small, politically conservative, devout Catholic, was a good-natured dumpling of a man. But inside lurked an untapped vein of savage wit that only the National Lampoon saw fit to unleash. Given carte blanche by its young editors, Rodrigues produced a 20-year tsunami of hilarious self-contained comic strips, themed gag spreads, and serials that boggled the mind and challenged all sense of decency and propriety. In this first-ever collection of his comics, readers are treated to the misadventures of conjoined twins The Aesop Brothers; Sam deGroot, a private detective in an iron lung (whose life actually gets worse when he is sprung from his enclosure); Deirdre Callahan, a girl so hideous that to look upon her causes madness and suicide; and the heartwarming (in relative terms) titular tale of Ray and Joe, the saga of a man and his dead best friend. Also included are his brilliant "biographies" of Marilyn Monroe, Abbie Hoffman, Eugene O'Neill, and others. Rodrigues rendered his cast of grotesqueries and naifs in a ragged, unpretty line within dense panels and pages, that perfectly reflects his uniquely bizarre, riotous and repellent world. Charles Rodrigues may be gone and, if not forgotten, insufficiently remembered, and this collection will rectify at least one of those tragedies.