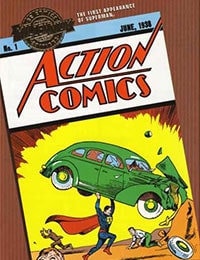 Although Krypton isn't mentioned by name, Superman's place of origin is given as a 'distant planet' destroyed by old age, from which a scientist sent his infant son to Earth in a space-ship. There is no mention of Jonathan or Martha Kent, and rather than being adopted by the Kents, the motorist who discovered his space-ship merely turned Clark over to an orphanage. Superman's powers were originally quite limited compared to those in the Golden Age books. He couldn't fly (although he could "leap tall buildings at a single bound"), and was invulnerable only to anything "less than a bursting shell". His powers increased gradually (and without explanation) over the succeeding issues of Action Comics. A more complete description of his origin, including mention of Krypton and the Kents, is given in the first issue of Superman in June, 1939.