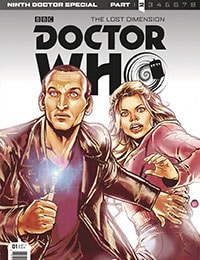 An unknown force is striking from the depths of space, emerging as impossibly-large white holes over civilized planets, absorbing or annihilating everything that lives. Captain Jack Harkness and Tara Mishra, companions of the Ninth Doctor, were caught up in one such white hole event, and – despite the valiant efforts of Jenny, the Doctor’s daughter – were caught by the white hole and absorbed!
But the Ninth Doctor and his companion Rose Tyler know nothing of this…Yet.