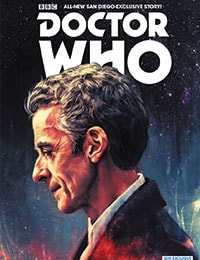 Welcome to the San Diego Comic Con 2015 Doctor Who Spectacular!
Whether this is your first taste of Doctor Who, or you've been a fan forever, this is the exclusive issue for you!
Who is the Doctor? He's an alien – an immortal Time Lord who has worn many faces in his long life. The last of his kind, he wanders time and space in the TARDIS, a time machine whose exterior is stuck in the form of an old British police phone box!
The Doctor chooses to share his amazing life with a variety of companions, and sees the wonders of the universe anew through their eyes.
The Doctor is currently on his Twelfth incarnation, and it's that Doctor Who's coming to Comic Con in an all-new short story! Read on now!
"Selfie" – The Doctor and Clara battle an ancient evil that is manifesting through the phones of fans in Hall H, in an all-new, San Diego-exclusive short story!
Creator Interview – Go behind the scenes on the making of the all-new San Diego Comic Con story with writers George Mann and Cavan Scott and artist Rachael Stott!