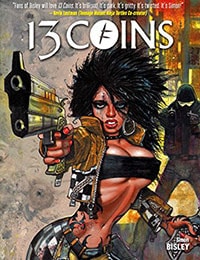 A NICE DAY FOR A RECKONING! John Pozner always knew he was special; that his athletic abilities and fighting skills were far from human. But with a broken childhood, drug addictions, and a criminal record on his plate, he's already fought more than his share of battles for one lifetime. Or so he hoped... Woken to his true angelic nature, John quickly finds himself at the center of an apocalyptic war - one that could spell the end of existence as we know it - with no choice but to train in order to confront the holy destiny he never asked for. From Eisner award winning artist, Simon Bisley (Hellblazer, Batman/Judge Dread: Judgment on Gotham, Lobo) and writers Martin Brennan & Michael B Jackson (Hitman: Absolution), comes an action-packed tale of Biblical proportions, where scheming politicians, secret societies and heavenly factions collide in a brutish struggle for worldwide domination. Collects 13 Coins 1-6.